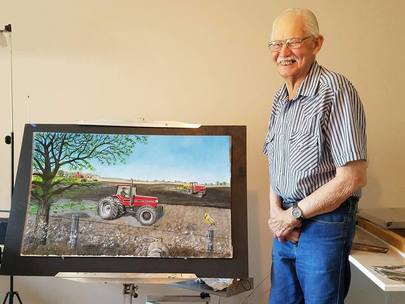 Russell Sonnenberg - Painter of authentic Tractor Art Russell Sonnenberg is the artist behind The Yesteryear Collection, a series of 80 (and counting) tractor prints. His works have been very popular with tractor enthusiasts. What fascinates these collectors about Russell Sonnenberg art is his brilliant ability to capture the essence of nostalgia and bring it back to the viewers' memory in vivid detail. "Oh, I remember," is a common phrase that people often use when admiring one of his pictures.

Russell grew up in Kossuth County in Iowa about 26 miles northeast of Algona.  He had been quoted as saying, "I grew up in the horse and buggy days." He began painting as a child mainly due to his mother's encouragement. Of course, his life on the farm heavily influenced his work a lot. In his younger days, he worked as a tractor mechanic at an Allis Chalmers dealership. His fascination with Allis Chalmers is evident in the number of paintings he has done of that specific brand.

Over the past 42 years, he had painted various nostalgic country and farm scenes. At the suggestion of his lifelong wife Audrey, "paint what you know" he returned to painting tractors. Russell enjoys feeling close to nature and purposely puts a burr oak in the left side of his paintings. He has always felt that tree had its own character and enjoys using it as a trademark that makes his work distinguishable from all other artists.

Russell never entered art competitions or painted for fame, as so many other modern day artists. He just wanted to paint something that would touch the hearts of tractor collectors and people who have those nostalgic fond memories of the farm life. People love to reflect back on the simpler times of the forties and fifties. With this in mind, and a great deal of research, Russell goes to work on each painting treating it as his newest masterpiece.

A great deal of research goes into each painting to make sure that it is historically accurate. In order to pay very close attention to the mechanical detail of the various tractor models, he used his camera to take photographs. Russell said, "I take a picture of this part and then that part, plus I make sure that I take the pictures a the angle I want so I can use them for reference. Also, I like to take photos at 2:00 in the afternoon because then the shadows aren't weird and the sun isn't as harsh as it is at noon. I also like to have owner's manuals (as a reference)." Each painting requires about 150 hours of painting time, plus about 100 hours of research. He says each time he has times himself, it comes up to be about the same for each painting.

Russell has painted many different models trying to make sure that nobody gets left out. Many artists will focus on John Deere and International. Russell paints models of Allis Chalmers, Minneapolis Moline, Ford, Oliver, Massey-Harris and Case to round out the strong blend of collectible tractors. Russell paints for the sheer enjoyment of the craft usually during the long winter months in the basement of his home in Forest City, Iowa. He does not paint in the summer as he is usually too busy with other activities.
Each of his paintings has a unique story to tell. He will be releasing four new prints this summer. The stars of his painting are, of course, the tractors. 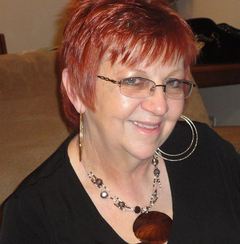 Jan Perdew - Nostalgia .  From rural southwest Iowa comes the artist Jan Perdew. Her paintings are inspired from her memories of life and times on the family farm. Some are created from concepts inspired by requests of her clientele, photos of cars, farm equipment, family homes and farmsteads, and favorite animals.

Jan does her mostly self-taught artistry on saws, canvas, and scores of other objects. She refers to herself as a "genuine recycler" turning unwanted, unused, and obsolete objects into gorgeous works of art. She will, upon request, turn "that old rusty saw that Grandpa used when I was a kid" into a cherished keepsake to be proudly displayed. With over 30 years of painting experience and the encouragement from her husband, she began painting full time in 1986. Taking her artwork on the road from 1987-1998, she then toured with the Silver Dollar City Craft Guild, a traveling showcase of crafters promoting Silver Dollar City, Branson, MO, until the group disbanded.

After the end of those tours she continues today with various other sponsors at shows in the Midwest. Her three children, Monte, Ashley, and Krystal have grown up during these years working and learning at the craft shows with their mother. We truly hope that the country charm of the paintings in this site will find a place in your home and bring back many fond memories.